What Is JSON Web Token Authentication?

Token-based authentication is stateless - it does not store anything on the server but creates a unique encoded token that gets checked every time a request is made.

Unlike session-based authentication, a token approach would not associate a user with login information but with a unique token that is used to carry client-host transactions. Many applications, including Facebook, Google, and GitHub, use the token-based approach.

JWTs can be signed using a secret (with the HMAC algorithm) or a public/private key pair using RSA or ECDSA. Although JWTs can be encrypted to also provide secrecy between parties, we will focus on signed tokens. Signed tokens can verify the integrity of the claims contained within it, while encrypted tokens hide those claims from other parties. When tokens are signed using public/private key pairs, the signature also certifies that only the party holding the private key is the one that signed it.

What Does JSON Web Token Contain?

The token is separated into three base-64 encoded, dot-separated values. Each value represents a different type of data:

Consists of the type of the token (JWT) and the type of signing algorithm (HMAC, SHA256 or RSA) encoded in base-64.

The second part of the token is the payload, which contains the claims. Claims are statements about an entity (typically, the user) and additional data. There are three types of claims: registered, public, and private claims.

These are a set of predefined claims which are not mandatory but recommended, to provide a set of useful, interoperable claims. Some of them are: iss (issuer), exp (expiration time), sub (subject), aud (audience), and others.

These can be defined at will by those using JWTs. But to avoid collisions they should be defined in the IANA JSON Web Token Registry or be defined as a URI that contains a collision resistant namespace.

These are the custom claims created to share information between parties that agree on using them and are neither registered or public claims.

To create the signature part you have to take the encoded header, the encoded payload, a secret, the algorithm specified in the header, and sign that.

For example if you want to use the HMAC SHA256 algorithm, the signature will be created in the following way:

The signature is used to verify the message wasn’t changed along the way, and, in the case of tokens signed with a private key, it can also verify that the sender of the JWT is who it says it is.

The following shows a JWT that has the previous header and payload encoded, and it is signed with a secret.

The way token-based authentication works is simple. The user enters his or her credentials and sends a request to the server. If the credentials are correct, the server creates a unique HMACSHA256 encoded token, also known as JSON web token (JWT). Since tokens are credentials, great care must be taken to prevent security issues. In general, you should not keep tokens longer than required.The client stores the JWT and makes all subsequent requests to the server with the token attached in the Authorization header. The content of header should look like the following:

This can be, in certain cases, a stateless authorization mechanism. The server’s protected routes will check for a valid JWT in the Authorization header, and if it’s present, the user will be allowed to access protected resources. If the JWT contains the necessary data, the need to query the database for certain operations may be reduced, though this may not always be the case or JWT is compare with the one it has stored in the database.

If the token is sent in the Authorization header, Cross-Origin Resource Sharing (CORS) won’t be an issue as it doesn’t use cookies.

Setting Up JWT Authentication In Rails

Lets start with creating a Rails API only application:

By appending --api at the end of the generator, an API-only application will be created. An API application is a trimmed-down version of standard Rails application without any of the unnecessary middleware, such as .erb views, helpers, and assets. API applications come with special middlewares such as ActionController::API, request throttling, easy CORS configuration and other custom-waived features for building APIs.

First create the user model with devise, considering you have already installed devise in your application

Then run the migration

Once the user model is done, the implementation of the JWT token generation can start. First, the jwt gem will make encoding and decoding of HMACSHA256 tokens available in the Rails application. So,at first

Once the gem is installed, it can be accessed through the JWT global variable.

Let’s start with generating the token using jwt gem when a client enter their credentials and send them back the generated token. For that, lets make a session controller to perform login operation.

This will make a session_controller.rb under api directory where we will write our token generating code using jwt gem.

So what we basically did here is, at first we find the user by email when client enter their credentials. Then we check if the password sent by client is valid or not. After its validation, we generate the token using JWT global variable as given by jwt gem.

We can include any information inside payload as we have already mentioned above in payload topic, here we have passed the user id and expiration time for token.

Here we have used signature as a base-64 encoded version of the Rails application’s secret key (Rails.application.secrets.secret_key_base). Because each application has a unique base key, this secret key serves as the token signature.

And at last we give back the client with token and user information. Now whenever client request for any information it sends this token along with it and gets back the required information if the token is valid which is checked on the server side.

Lets make a controller named api which will authenticates every request made checking the token send by the client.

current_user method job is to first extract the token and then decode it to get the payload we have sent earlier and on the basis of that payload it identifies the user. There is also a exception handling for the expiration of JWT token. If the token is valid and user is identified, it return user else nil is returned.

Now lets create another model named Hotel and controller hotels_controller.rb to provide the hotel details of the specific identified users.

Lets create a seed file to perform the authentication for our application. 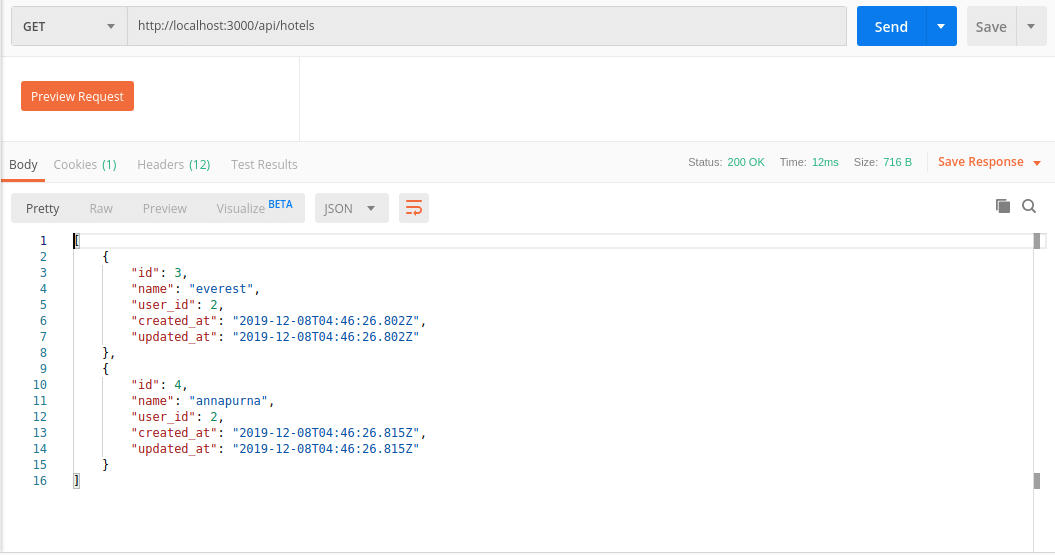 when request performed without token 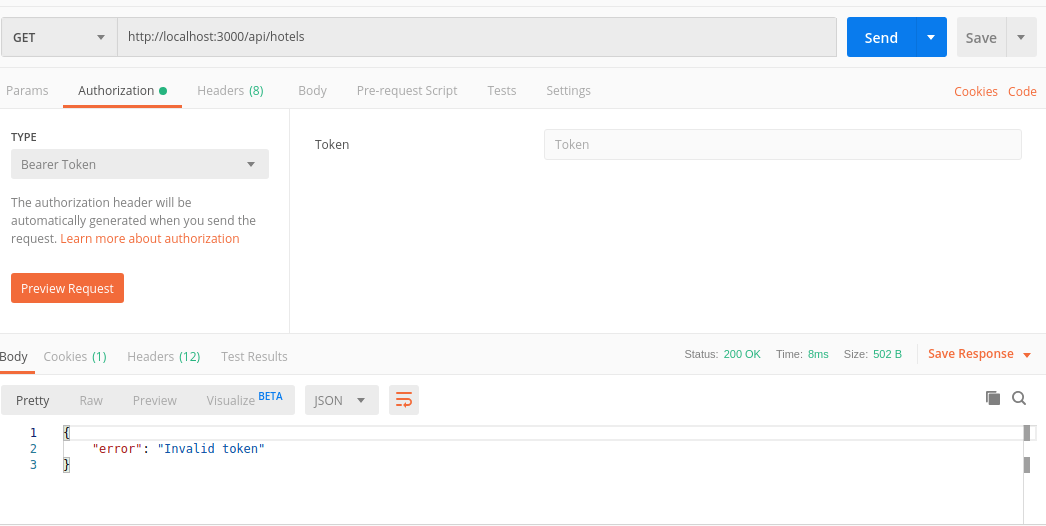 when token has expired