Controlled and Uncontrolled Components in React

In HTML, form elements such as <input>, <textarea>, and <select> typically maintain their own state and update it based on user input. In React, mutable state is typically kept in the state property of components, and only updated with setState().

We can combine the two by making the React state be the “single source of truth”. Then the React component that renders a form also controls what happens in that form on subsequent user input. An input form element whose value is controlled by React in this way is called a “controlled component”.

A controlled input accepts its current value as a prop, as well as a callback to change that value. Which is fine and all… but the value of this input has to live in the state somewhere. Typically, the component that renders the input (aka the form component) saves that in its state.

For example, if we want to log the name when it is submitted, we can write the form as a controlled component:

With a controlled component, every state mutation will have an associated handler function. This makes it straight forward to modify or validate user input.

The uncontrolled inputs are like traditional HTML form inputs. They remember what you typed. You can then get their value using a ref, instead of writing an event handler for every state update. For example, in onClick handler of a button. In other words, you have to ‘pull’ the value from the field when you need it. This can happen when the form is submitted.

For example, this code accepts a single name in an uncontrolled component:

What makes an element “controlled”

There are other form elements, of course. You have checkboxes and radios and selects and textareas. A form element becomes “controlled” if you set its value via a prop. That’s all. Each of the form elements, though, has a different prop for setting that value, so here’s a little table to summarize: 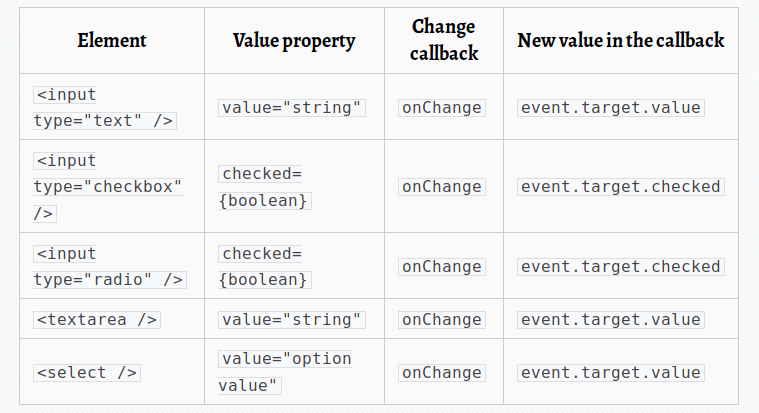 Both the controlled and uncontrolled form fields have their merit. Evaluate your specific situation and pick the approach — what works for you is good enough.

If your form is incredibly simple in terms of UI feedback, uncontrolled with refs is entirely fine.